After Liz was diagnosed with have a brain tumor from which she was told she would die, she could not continue her portrait photography work. Someone suggested that the study of icon writing might be a way to express her faith. So Liz met with an iconographer, who suggested that she begin to learn the rudimentary techniques by using them on a very simple icon of her choosing. Unsurprisingly, she chose an image of the Eucharist. This is the little icon she produced as an experiment. 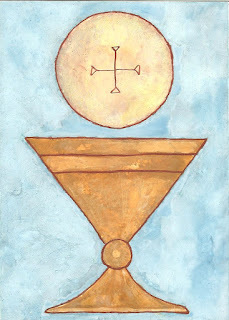 The Eucharist was at the center of Liz's religious life, and this is simply one of the many indications.

Since Liz's tumor was next to the part of the brain that controls language, she suffered a gradual loss of the ability to speak and write. In the last weeks of her life, she sensed without fully understanding what was happening that the words coming out of her mouth and the words she struggled to scribble on paper were not the words she was trying to speak or write. It was for her a devastating and sometimes terrifying loss. For me, helpless to do anything but reassure her of my love, it was a heartbreaking process to watch.

Now Liz's handwriting had always been impeccably feminine and lovely, but as the tumor spread she rapidly lost the ability to write legibly.

So, try to imagine: If you had already lost the ability to speak and you knew that you were losing your ability to write legibly; if your use of language was slipping away and there were words you could not live without, what would they be? What would you write -- not for anyone else to read, but just in an effort to hold on to the gift of language itself, and especially to the words most precious to you and thereby to the reality to which they pointed? What would be the last legible thing you would ever write?

Just a few days ago, I found a scrap of paper in the things that were next to where Liz spent her last weeks. The paper was folded, and I had not bothered to look at it earlier. It was something Liz wrote, not to be read by anyone else, but I'm sure just because these were the words that quintessentially defined her. These may well be the last words she ever wrote: 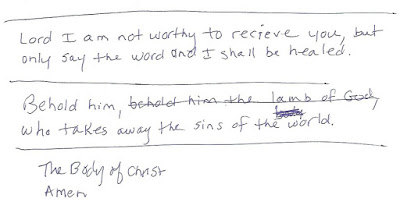 These are the words spoken by priest and communicants at the elevation of the Eucharist just before the distribution of communion. The last ones -- "The Body of Christ" -- are spoken by the priest as he gives the consecrated bread to the communicant, the word "Amen" is the communicant's response.

This little scrap of paper is the single most valuable possession I have, for it is quite literally Liz's last (surrender of) will and testament.

I had our gravestone designed weeks before I discovered this note, but I did not need this note to know how central the Eucharist was in Liz's life. 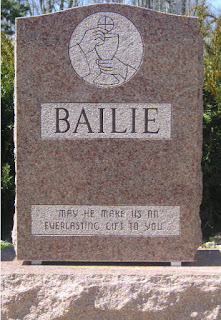 The inscription at the bottom, as I noted in an earlier post to the weblog, is: "May He make us an everlasting gift to You," taken from one of the Eucharistic prayers.

What an absolutely beautiful testimony to the centrality of the Eucharist in Liz's life. Those first words she scribbled on that scrap of paper - "Lord, I am not worthy ..." - are precisely the ones I've requested for my own gravestone.

"May the Body and Blood of Christ bring us to everlasting life."