During Holy Week, my posts will for the most part be silent ones, images with a minimum of commentary. And they will often and unavoidably be remembrances of the Paschal Drama through which Liz lived during the last weeks of her life.

Just before entering into the spirit of Holy Week, however, I am prompted by something posted today by Diogenes at Catholic World News Off-the-Record site, a piece about the retrofitting of the Lord's Prayer by group calling itself the "Non-Theistic Liturgy Resources Working Group" at St. Stephen's College in Edmonton, Alberta.

The rephrasing is perfectly predictable. It could have been written in one's sleep. The "welfare of the Earth" -- complete with a upper case E -- admission of our "shortcomings," and so on.

The author of this vacuous catalogue of platitudes is Rev. Dr. Charles Bidwell. As Diogenes notes, Dr. Bidwell is anxious to point out that: "... at no time does this indicate a petition to an external force to intervene and do the work which only we can do."

Which brings me to this from Benedict XVI:

On a related theme, speaking of the Cross of Christ, the future Benedict XVI wrote this in his now-classic Introduction to Christianity. The Cross, he wrote, "expresses the primacy of acceptance over action..."

One of the persistent themes in the writings of the great French theologian, Henri de Lubac, was captured in the title of one of his books: The Paradoxes of Faith. It is precisely these paradoxes that are lost on those who have lost the faith that keeps the paradoxes from turning into crude antitheses. Cardinal Ratzinger spelled out one such paradox in Introduction to Christianity:

The primacy of acceptance is not intended to condemn man to passivity; it does not mean that man can now sit idle. On the contrary, it alone makes it possible to do the things of this world in a spirit of responsibility, yet at the same time in an uncrampted, cheerful, free way, and to put them at the service of redemptive love. 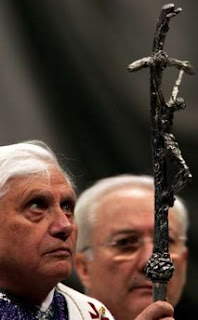 This is an excellent post, and a nimble leap from the cringe-making Lord's Prayer (the link/commentary on it is well worth reading, too) to Benedict. If you ever have a chance, you might want to check out a short story by Heinrich (sp?) Boll (a Catholic German writer) called "Murke's Collected Silences." The connection to the revised Lord's Prayer will be obvious when you read it.