The Honeymoon is over ...

The Courtship Has Begun ... 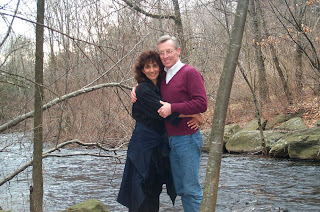 In C. S. Lewis's The Chronicles of Narnia, after Aslon the lion, the Christ figure of the story, is slain by the White Witch, he appears to Lucy and Susan and offers an allegorical explanation of the Paschal Drama -- Good Friday to Easter -- namely that as a result of the victory of the Lamb Slain "Death itself would start working backward ..."

It is an echo of the passage in Matthew's Gospel about the immediate effect of Christ's death:

. . . the tombs opened and the bodies of many holy men rose from the dead, and these, after the resurrection, came out of the tombs, entered the Holy City and appeared to a number of people. [Matthew 27:52-53]

I have said that my reminiscences about Liz will subside after Easter, but until then I will share then, not just to indulge in nostalgia, but because since Liz's death I have been witness to the miracle to which both C. S. Lewis and Matthew the Evangelist allude. There are no words to describe what has occurred, but death working backward is a fair approximation.

The last months, and especially the last weeks, of Liz's life -- when I was attending to her needs 24 hours a day, and when with each passing day she was losing one faculty after another -- that period of time was like nothing so much as a honeymoon. We were entirely alone; I hardly left her side. I held her hand, stroked her forehead with a cool cloth, and watched for signs of some need which she might not be able to express in word or gesture. The intimacies involved, while not the sort that one typically associates with those of the honeymoon, were nonetheless opportunities for tenderness and trust and vulnerability that seem to be the crowning event in our commitment to become "one flesh."

So, analogously, the honeymoon is over, but not in the ordinary rather cynical sense, for our marriage now has anchorage on the far side of the divide to which the Aslon alluded, where death works backwards. In the world that Liz and I now share, and into which our marriage has now moved, not only does death work backward, but the honeymoon is followed by the courtship. For nothing better describes the experience I have had of Liz since her death than the vocabulary of courtship, or better still, the vocabulary of falling in love -- as if for the first time. Perhaps what awaits at the end/beginning is meeting for the (very) first time. Meanwhile, though it hasn't relieved the heartache, the present courtship is accompanied by the most extraordinary influx of grace I have ever experienced, a tribute, no doubt, to Liz -- for whom grace was as palpable as bread and wine and as necessary as air and sunlight. 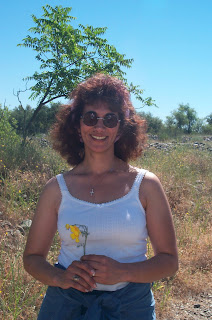 Liz on a walk near our home,
a place called "Buck Hill"

When I met Liz, she lived between the Trappist Abbey and Buck Hill, a large wooded area which was right outside the door of her little cottage in the woods. She loved to hike, and she knew every inch of Buck Hill and the woods that surrounded it. Part of our (first) courtship consisted of Liz taking me to her favorite hiking areas.
The explorations continue.
Spring has arrived.
The courtship has begun (again). 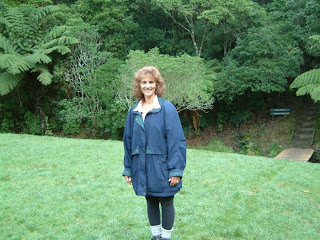 Reading your post today, I was struck by the fact that Liz, now in the presence of the Father, is therefore gratia plena, full of grace, which is to say, full to overflowing with the love of God. Is it any wonder that the fullness of that love and grace is being experienced, however dimly, by her own beloved through the marital union they share, and which endures even death?