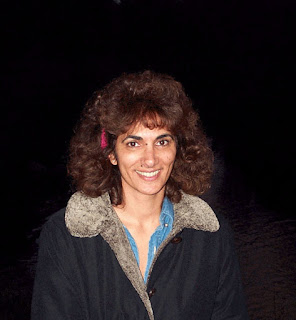 As I've repeatedly promised, these highly personal posts will taper off dramatically after Easter. For the time being, however, during my Lenten lament over the loss of my Liz, they are my contact with the outside world, so to speak.

At the recommendation of my friend Paul Caringella, I am reading Gertrud von Le Fort's The Song at the Scaffold, the novella about the Carmelite nuns guillotined during the Reign of Terror. Early in the narration, the narrator says parenthetically: "Mystery, as you know, is intolerably annoying to enlightenment such as ours." Reading that sentence this morning inspired me to change my mind and post something about an experience I had yesterday, which I thought of posting, but later chose not to.

We, too, live in an era that finds mystery intolerably annoying. The masters of suspicion ... the hermeneutics of suspicion ... these are the intellectual tools indigenous to our age. So perhaps when we occasionally are brushed by even modest manifestations of mystery, we have an obligation to risk the condescension of those armed with irony and insouciance by giving it the recognition it deserves.

So here is a little story.

I will start with where the story ends, because it seems a good enough place to begin it as well. It is two verses from the first reading for yesterday's Mass -- the Mass for the Feast of the Annunciation, which was moved from Sunday to Monday in deference to the importance of Sundays in the Lenten cycle.

The tradition of refusing to put God to the test, and of not relying on signs and wonders, is venerable one, for dependence upon "things seen" can prevent the maturation of the capacity to believe in "things unseen." We live by faith and not by sight. Nevertheless, in a faith-impoverished age like ours, the reticence about putting God to the test and the determination not to become dependent upon signs and wonders can easily morph into the naive empiricist's conviction that such things are inherently dubious and/or that God is too transcendent to stoop to them. (The Christian God has been known to stoop lower than that.)

So sometimes it is we who are being tested when presented with something uncannily extraordinary, for our willingness to give weight to such things can be a measure, not of our gullibility, but of our emancipation from the narrow epistemological confines of the materialist age in which we live.

So, bear with me; this will take a little unraveling.

Last week I phoned to schedule a service on my car. The only time available this week was yesterday morning (Monday) at 7:30 a.m. It seemed fine. I would go to Lauds and Mass at the Abbey, and then drive directly to the service center and arrive just on time. As I noted in a post on Sunday morning, I did not attend Mass at the Abbey, for there was a Mass for Liz at the Worcester Maronite church. On Sunday night, after it was too late to check with anyone at the Abbey, it occurred to me that the Feast of the Annunciation would probably be moved to Monday at the Abbey as well. If so, since it is a major feast day, Lauds and Mass would start 40 minutes later, making it impossible for me to attend and still make my appointment. (It turns out that the Annunciation was celebrated on Sunday at the Abbey, and I could have attended Lauds and Mass there, but that just makes the rest of the story that much more ... well, fascinating.

I wanted to attend Mass on the Feast of the Annunciation. My car was going to take several hours to service, so I decided that I would go to whatever church was closest to where the car was to be serviced. It turns out that it was Immaculate Conception church, the church where Liz received her first communion and where her funeral Mass was held.

I knew Mass at that church was at 9 a.m. because I had seen the parish schedule at the funeral Mass. And I knew the church would probably not be opened until 8 or after, so I lingered a while in the auto shop waiting room. I filled the time by finishing the last few pages of Benedict XVI's Apostolic Exhortation on the Eucharist, Sacramentum Caritatis, a wonderful document, on almost every page of which there were things that reminded me of conversations I have had with Liz, for whom the Eucharist was the center of spiritual life. I was pleased to think of the fortuitous coincidence of me reading the last pages of the exhortation just before going over to Mass at the church where Liz received her first communion.

At about 8:10, I left the service center to walk the half-mile to the church, arriving early enough to have some time to recollect myself. The church was empty, and concerned that the Mass schedule might have been changed to accommodate the Feast, I picked up a church bulletin, only to find that the 9 o'clock Mass was being said for Elizabeth Bailie. The Mass had been requested by Cynthia Capone, someone whom I have never met but who is on the Cornerstone Forum newsletter list and who knew of Liz's death from my newsletter to those on our list.

So I found myself, along with about ten or so other regular communicants, attending a beautiful liturgy in a lovely church offered for my beloved Liz. Again, coincidence ... yes, at least that.

I have not asked for a sign either, nor would I give so lofty a designation to the graced convergence that brought me into the church where Liz received her first communion just in time to attend a Mass that, unbeknownst to me, was being offered on her behalf. Those who know more of the details of the life Liz and I share(d), however, will know how typical this convergence is of the countless ones like it that Liz and I experienced.

I share this little miracle simply as an act of gratitude for it and as it is my duty to share what is essentially an ecclesial grace, deeply personal, but not private.

I just recently heard about Liz' passing and can only imagine the (physical) loss you are experiencing. I am also very grateful for being able to read your posts as a way to understand more about Liz and to honor her life on this earth.

P.S. I'm glad you second-guessed yourself and posted this last one on "mystery."