Before we were married, Liz and I were in Paris visiting René and Martha Girard and taking in the sites. (The Girard's -- who know Paris intimately -- gave us an unbelievable walking tour, dinner at a quintessentially Parisian restaurant included.) 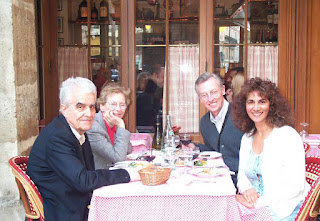 In a variation on Jesus' admonition to his disciples to be as wise as serpents and as innocent as doves, like many genuine and unaffectedly holy people, Liz is a bewildering combination of ageless, ancient, world-weary wisdom, on one hand, and giddy teen-age spontaneity, on the other. While we were in Paris, I came down one morning (Liz and I had separate hotel rooms, scandalizing our Parisian innkeepers), I found Liz, chalk dust on her hands, standing triumphantly over this sidewalk masterpiece: 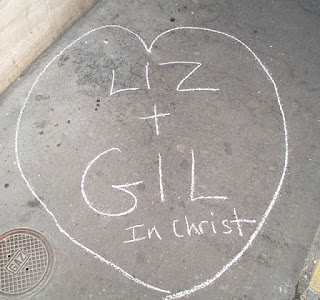 Sitting next to Liz the other morning as she slept, her physical and mental condition declining steadily, I picked up a book at random. As it happened it was one of Hans Urs von Balthasar's Theo-Drama volumes. I began reading where the bookmark was. The first words I read where these:

Eros contains a promise (described not only by pagans such as Shelley and Keats, but also by Christians such as Claudel) which is always pointing beyond the sentiment that sighs "Abide a while, thou art so beautiful!" and which, therefore, if it is not transposed onto the Christian level, must condemn itself to eternal melancholy and self-consumption. This total structure of beauty can be redeemed only if the risen Lover is again met at the other side of death -- the risen Lover who does not disappoint with his blessed Noli me tangere [Do not cling to me] and with his withdrawal at the Ascension, the Lover who leaves no shadow of sorrow behind him, but who snatches up the loving and adoring heart and carries it away with him: where your treasure, where your darling is, there also is your heart.

"Eros contains a promise" which points beyond itself, and which Liz astutely and intuitively acknowledged in the "in Christ" footnote on her lovely little piece of graffiti.

Extremely beautiful post, as is the photo'd foursome in Paris. Prayers for ever-new grace for both of you, and the continuing insight that, as Truth, consoles.

In the heart of the hands of God.

The love beyond all measure does find a place within a human heart divinized by Christ our Lord. Love, like sorrow, is each man's own and not to be known by comparisons of greater to lesser, for all such measures lose significance both in a heart of sorrow and of love. We speak of things of which we cannot speak when we touch the eternal depth which is known upon entry.

No doubt you came across Sheldon Vanauken's classic A Severe Mercy long ago. Your words and photos seem a similar recollection of what eros, philia, and agape looks like in the triune marriage covenant between man, woman and God -- the greatest adventure in human experience.

Thank you for sharing it with us.

I just found your blog and there's not much I can say except that I absolutely loved your book and that now I shall pray for you and your wife. May God give you the strength to continue sharing your Light. It's a very rare gift.