"Is it religious or an instrument of war?" asked Priam the king of Troy about the giant wooden horse the Greeks had offered as a gift to the Trojans.

In a post on October 21st entitled "Distant Mirrors" I reflected briefly on Bernini's sculpture of Aeneas escaping the destruction of Troy carrying his father and leading his son by the hand. I suggested that it was the story of cultural destruction, the slow-motion version of which is happening to Western culture today. I am reminded again of this theme by Sandro Magister's online journal Chiesa. 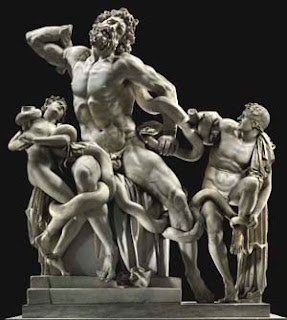 Laocoön was a Trojan priest who recognized the Trojan Horse for what it was, an assault on Trojan civilization. Unable to convince his fellow Trojans ("Beware of Greeks bearing gifts."), he threw his spear at the Trojan Horse. It stuck quivering in the side of the wooden horse, offending the gods to whom the Greeks relied for help. These gods sent serpents to destroy Laocoön and his sons. Once Laocoön was silenced, the Greek conquest of Troy could proceed.

As Sandro Magister points out, the magnificent sculpture of Laocoön and his sons was discovered as St. Peter's Basilica was being built in 1506, the anniversary of which is now being celebrated. Pope Julius II, out of great respect for Greco-Roman antiquity and confident of Christianity's role as the new civilizing agent in world history, brought the sculpture to the Vatican, the first of the great collection that is now the Vatican Museum.

While in Rome in October, Liz and I marveled at this extraordinary masterpiece from the first century BC. A few weeks earlier, Pope Benedict had given his now famous Regensburg lecture, and the howls of protest were still hanging in the air -- the martyrs and the torched churches still a vivid memory. Benedict it seemed, like Laocoön, was paying for his courage in telling the truth to those preferring something more comforting.

Virgil describes a similar preference for soothing interpretations of events. Laocoön's fate seemed to prove that he was just an old man too blind to the multicultural promises at hand to be any longer trusted.

... Laocoön
has justly paid the penalty — they say —
for outrage, since his spearhead had profaned
the sacred oak, his cursed shaft been cast
against the horse’s back.

We break the walls and bare the battlements.
We set to work; beneath the horse’s feet
we fasten sliding wheels; about its neck
we stretch out ropes of hemp. And fat with weapons,
the engine of our fate climbs up the rampart.
And boys and unwed girls surround it singing
their sacred chants, so glad to touch the cable.

. . . four times it stalled
before the gateway, at the very threshold;
four times the arms clashed loud inside its belly.
Nevertheless, heedless, blind by frenzy,
we press right on and set the inauspicious
monster inside the sacred fortress.

Nature abhors a vacuum, and human nature abhors a religious vacuum. If, as David Aikman (quoted in yesterday's post) said, "European intellectuals appear to have made a philosophical choice: anything but Christianity," then the resulting vacuum will be filled with something else.