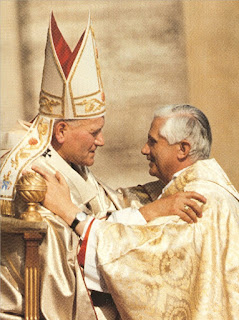 I posted this image after I found it in a shop in Rome. As I probably said in that post, it captures the special joy and meaning of a friendship grounded in mutual faith. Liz and I lead a more or less monastic existence, especially now that she is ill and I rarely leave her side. So my life is a good deal less social than it once was; though it was never all that gregarious. Be that as it may, it has been my great good fortune to have a few friends with whom I am privileged to share a relationship analogous to the one between John Paul and the future Benedict captured in the photo above and the one between John Paul and Msgr. Luigi Giussani (the founder of Communio and Liberation) below. 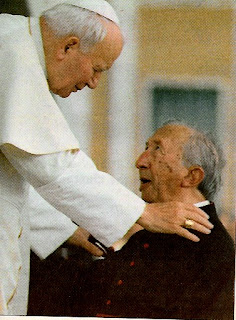 One of these friendships is with Randy Coleman-Riese, the Cornerstone Forum executive director. When he was received into the Catholic Church, as a very modest token of my admiration, I gave him a copy of Cardinal Joseph Ratzinger's Co-Workers for the Truth. He has been kind enough to share with me from time to time passages that he has found especially meaningful or pertinent to matters with which one or the other of us is concerned at the moment. One such passage which he sent a few weeks ago floated to the surface again this morning and struck me as something I would like to share with you by way of a mutual tribute to Randy and to Benedict. In a radio broadcast in 1978, Joseph Ratzinger (who was, I think, an Archbishop at the time) said this:

One who can offer nothing to mitigate the suffering of humanity but the expectation that that suffering will one day come to an end has no answer to the most crucial of all questions. On the contrary, by such an answer he affirms suffering as something entirely meaningless and thereby confers on it its devastating horror. What humanity needs is a community that supports the individual in death as well as in life and can make his suffering meaningful.

To be part of such a community -- one comprising both the living and the dead -- and to be blessed with a few of the special friendships it nurtures, is one of the great unearned blessings of life.