On a Personal Matter ...

The pathology report from Liz's recent surgery was not encouraging. The choices we face are limited but nevertheless perplexing, and, though they may include a respite, they don't likely include a cure. Please keep Liz in your prayers and thoughts. We daily pray for all those praying for us, and I can vouch for the value of Liz's prayers in this regard.

Liz is peaceful and cheerful. She has lived a contemplative life for decades, and her faith is deep and abiding. She is just a little further down the road we all travel. She leads the way, like a good guide, by holding the lantern behind her, thus throwing more light on the path of those coming behind her than on the path she herself is treading.

There was nothing intentional about the fact (remarked upon in an earlier post) that we have just gotten around to framing and hanging the Caravaggio painting entitled The Taking of Christ, but there is surely something providential about the timing, as there have been so many providential aspects to the life Liz and I share. The painting hangs over the fireplace, and sitting before it yesterday as we were absorbing the medical news, Liz remembered the painting that struck us so in Rome, the painting of the Last Supper by the Italian painter, Jacopo Bassano, and she remarked on how similarly Christ is depicted in each painting. In Bassano's painting, the disciples are oblivious of the significance of what is happening in their presence. 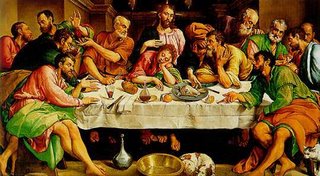 In the Caravaggio painting, the long loneliness that Bassano depicts as beginning at the Last Supper intensifies and becomes life-threatening, but Christ remains poised, attentive as He as He was in Bassano's Last Supper to His Father's will. 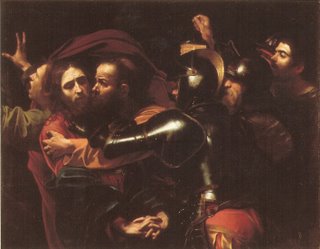 These were not the idle thoughts of an art critic. They were Liz's insights into the mystery she was experiencing from the inside.

Please keep her in your prayers.