When Liz and I were in Rome for a conference just after her first brain surgery, we had a visit with the preacher to the papal household, Fr. Raniero Cantalamessa, O.F.M. Cap., who has an interest in the work of Rene Girard. Fr. Cantalamessa gave Liz a blessing that was truly extraordinary. 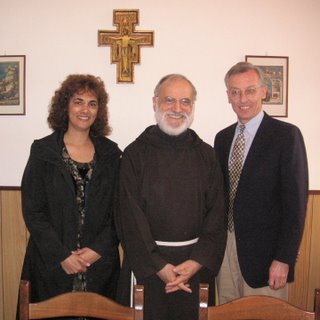 The non-scriptural reading for today's Mass in the Magnificat is an excerpt from Fr. Cantalamessa's books. In it he makes the point that, far from making Jesus less human than the rest of us, Jesus' sinlessness was what made him the human epitome. For sin corrupts and cripples our humanity, which is inseparable from our Godlikeness -- made in the image and likeness of God as we are. Fr. Cantalamessa quotes Augustine:

To this point has human perversity arrived, that he whom lust overcomes is regarded as a man, whereas he whom has overcome lust cannot be a man. Those who overcome evil cannot be men, whereas those whom evil overcomes are men indeed!

To which Fr. Cantalamessa adds:

"Human" has come to mean rather what we have in common with the beasts than what distinguishes us from them, such as intelligence, will power, conscience, holiness.

This truth resonates on many levels, but Augustine's use of the vice of lust to illustrate a much wider human perversity brings readily to mind some familiar forms of it. Perhaps, please God, the young are today coming to their senses (the cultural influence that surround them notwithstanding), but in recent times virginity and celibacy were nothing but objects of scorn, while meretriciousness and sexual indulgence of any and every imaginable sort were unofficially regarded as signs of health and vitality. Augustine, as so often, saw the essential features of this in the 5th century.