A Christian is someone who's met a Christian.

One of the most moving images I encountered in Rome, oddly enough, occurred in one of the many often kitschy religious article shops that surround the Vatican. It is a 1978 photograph of the greeting between the newly elected Pope John Paul II and then-Cardinal Joseph Ratzinger, now Pope Benedict XVI.

What is called “apostolic succession” can become an dry formulaic argument. If its deep meaning and value are to be felt, we must not forget how simply human the concept is. Faith passes from one person to another, and the inspiration to proclaim it with conviction and charity is likewise received from those whose lives we admire and emulate, and who have, in one way or another, passed the mantel of mission on to us. This 1978 photograph represents for me one of the great mysteries of Christian faith, even as it gives a very human depiction of what apostolic succession really means. 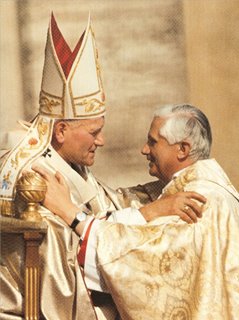 According to my friend Giorgio Buccellati, Professor Emeritus of Ancient Near East and History at UCLA, Christianity depends on “an institutional charisma founded not on abstract legislation, but on personal bonding.” For, as professor Buccellati puts it, “… the ontic order is personal, and cannot be understood without reference to such a personal dimension …”

Sacramentality is rooted in face-to-face confrontation: it avoids the anonymity of a generic prayer felt only as wishful thinking. … [It] can be presented as a special dimension of human culture, namely, as … (1) the personal and physical contact embodied in the succession of an unbroken line of human individuals; (2) the physical property whereby the sacraments are given to us as the vehicle through which our individual sins are individually touched by redemption, with procedures that are normal for such transmission within human culture; and (3) the impact that sacramental presence has it touching all humans through other humans, again through a process analogously found in culture, where humans are purveyors of experience to each other. [Communio, Vol. XXX, No. 4, Winter 2003]

Another precious dimension of this photo is the strong, loving embrace of a Pole and a German, both of whom lived through the horror of WWII. Truly, Christ reconciles all things - and people - in Himself.